Rudolph Enstrom was the founder of the Enstrom Helicopter Corporation.

Rudolph J "Rudy" Enstrom was born on June 23, 1916, in Crystal Falls Michigan. He started his career as a mechanic in an iron mine in Michigan.

However, Rudy always dreamed of designing and building his own helicopter. Starting with conceptual sketches in 1943, he began testing his home-built prototypes in 1957. For his first prototypes, Mr. Enstrom had the financial backing of a number of local businessmen, but unfortunately, he lacked technical expertise. However, he was still able to file three patents from his first design. Soon enough, the investors were able to recruit a number of experienced aviation designers and the company was formed as the R.J. Enstrom Co. in 1959. Over the decades, Enstrom's business would succeed around the globe. In April 1965, the FAA issued the type certificate for Enstrom’s first helicopter, the F28, and deliveries commenced soon thereafter from his Upper Peninsula factory.

Although Rudy Enstrom's original homebuilt helicopter did not fly, it nevertheless formed the nucleus for the Enstrom Helicopter Corp., which would become known for its light and sleek designs.  He sold his company to Purex industries, and ownership would switch hands many times before it was sold to a Chinese firm.

From a mine mechanic's crude home-built a helicopter to the sleek, three-place, piston engine-powered helicopters produced by Enstrom today, is a quantum leap which reflects the power of a small group of enterprising engineers and entrepreneurs energized by a dedicated leader. 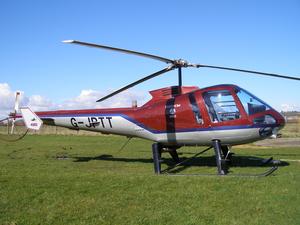 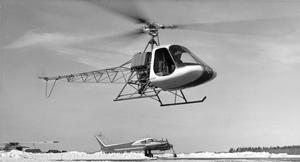