The first twelve AH-1Gs (including 66-15247, a hand-built pre-production test aircraft) arrived at Bien Hoa Air Base, Viet Nam on August 29th, 1967 as part of the "New Equipment Training Team." Comprised of combat-experienced pilots as well as specialists from Bell Helicopter, Emerson Electric and Lycoming, the NETT was first established in August 1966 to train UH-1 crews on the brand-new AH-1.

The first flight of an AH-1G in Vietnam was on August 29th (their first day of arrival). Six AH-1Gs remained with the NETT, while the other six were assigned to Army units (see notes). First combat (unofficial) occured on a training mission on September 4th, 1967, five days after the aircraft arrived in Viet Nam. 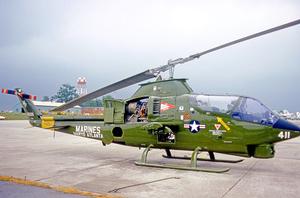